HAVE A BUTTERFLY QUESTION?

What is a butterfly?

Unlike many other insects, butterflies are widely embraced and celebrated for their beauty and charisma. In addition to their cultural significance and aesthetic charm, they make a very valuable contribution to ecosystems worldwide and are important study animals for ecology, evolution, and conservation biology. All butterflies and moths are insects (Class: Insecta). Insects are the most abundant and diverse group of animals, making up over 58% of the world’s known biodiversity. They can be found living on land, in the air, and underwater – thriving almost everywhere except for the open ocean. Insects are an important part of our ecosystems, and we still have much to learn about them! Butterflies and moths belong to the insect Order Lepidoptera, which is a word that comes from the Greek words for “scale” and “wing.” This is because all the patterns and colours on the wings and bodies of butterflies and moths are made up of tiny coloured scales. Along with their distinctive coiled proboscis (mouthpart) and big showy wings, these features make butterflies and moths different from all other insects. The order Lepidoptera contains an estimated 150,000 described species (mostly moths) and there are an estimated 18,000 described butterfly species found globally. The earliest known butterfly fossils date to the mid Eocene epoch, between 40–50 million years ago.

Where do butterflies live?

All butterflies are terrestrial, meaning they live on land. Although most known species are tropical, butterflies can be found living throughout the world – from the tropics on the equator to northern regions above the arctic circle, and from sea level to mountain tops over 6000 metres tall! Butterflies can be found in nearly all types of habitat, including desert, wetlands, grassland, forest, and alpine. Some butterflies in the family Lycaenidae spend part of their lives underground! Their caterpillars are tended by ants in exchange for providing the ants with sweet honeydew.

A butterfly’s habitat depends on its species. There are many species, such as the Karner Blue (Lycaeides melissa samuelis), left, that have very specific habitat requirements and can’t live anywhere else. The Karner Blue butterfly depends on a rare ecosystem called an Oak Savannah for its habitat, and since most of Ontario’s Oak Savannahs were destroyed, this species no longer lives in Ontario and is now extirpated (locally extinct) from Canada. Alternatively, butterflies such as the Cabbage White are very adaptable and can be found in many different habitats and on many different continents.

Parts of a Butterfly

All insects, including butterflies, share a common overall body design. A butterfly’s body is divided into three main sections, the head, the thorax, and the abdomen. Each body section has very different functions, and all are needed for the butterfly to live.

A butterfly’s head is full of extremely important organs that allow the butterfly to sense what is around it and to feed.
On the head, you will find:

Attached at the top of the head. Antennae are sensory organs used to pick up chemicals in the air, which may be anything from the smell of flowers to the scent of a potential mate. They also help with balance and in detecting motion. Think of them as the butterfly’s version of a nose. 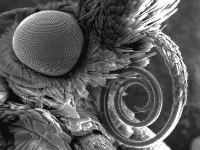 Unlike human eyes, which each have one lens, each of a butterfly’s compound eyes is made up of many smaller “eyes” called ommatidia, which each have their own lens. The butterfly’s brain stitches the information from all of these tiny eyes into a picture of the world around it. Butterflies likely don’t see the crisp, clear images that we see as humans, but they make up for it in other ways! Since the ommatidia in their compound eyes are all pointed in slightly different directions, butterflies can see forwards, backwards, above and below themselves all at the same time. As well, butterfly eyes can see ultraviolet light, which humans cannot. This comes in handy, since some flowers and even other butterflies have special markings on them that can only be seen in ultraviolet light.

The proboscis is the butterfly’s mouthpart. It is used like a straw to suck up liquids such as flower nectar, water, fruit juices, leaking tree sap, animal sweat, or other things depending on the species. When in use, the proboscis looks like a small wire coming out from under the front of the head. When not in use, it coils up tightly like a spring under the front of the head. Butterflies are only able to sip on liquids with their proboscis and are unable to pierce or break skin.

A butterfly’s thorax is a powerhouse that has everything a butterfly needs to move and fly around its environment.
On the thorax, you will find:

These are attached to the underside of the thorax. Each segmented leg has 5 sections, but the 3 that are easy to see are the femur, tibia, and tarsus. Think of the femur as the “thigh”, the tibia as the “shin”, and the tarsus as the “foot”. A butterfly’s legs have the same function as our own, helping them to climb and walk. However, did you know that a butterfly’s foot also helps it to taste? Special sensors on each tarsus pick up chemicals from the surfaces they walk on, which helps the butterfly to sense tasty liquids or identify host plants for their caterpillars. This is one reason to avoid picking up butterflies when possible – the creams and chemicals we put on our hands can be hard on their feet!

Why do some butterflies look like they only have 4 legs? Some butterflies, including very common species like the Monarch, appear to have only 4 legs. This is not because they have lost two legs. These butterflies come from the family Nymphalidae, or the brush-footed butterflies. All brush-footed butterflies do have 6 legs, but the first pair of legs is very reduced, and are tucked against the thorax and hidden in the body’s fuzz. You will only see these legs if you can carefully pry them away from the body with tweezers. These reduced legs have lost their function in this family of butterflies, and are not used for walking.

Although it may appear at first glance that butterflies only have two wings, if you have a closer look it becomes obvious that each side of the body has a forewing and a hindwing. The wings are covered with coloured scales, which are basically tiny flattened hairs that give colour to the wings. Butterfly scales are so small that without a microscope they just look like coloured dust, and they are delicate enough that they will brush right off the wing if they are rubbed. Scales are unique to butterflies and moths, and they come in three varieties: pigmented, diffractive, and androconia. 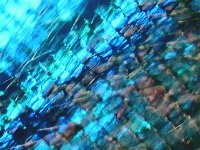 A butterfly’s wings are used for flight, but also have many other functions. Patterns on the wings can help camouflage the butterfly, warn predators that a butterfly is poisonous, surprise or distract predators with flashy displays, and help a butterfly attract and communicate with other butterflies of its species. In the case of poisonous butterflies like the Monarch, the wings are also an excellent place for storing toxins (though you would have to eat them to get sick).

A butterfly’s abdomen may not look like much on the outside, but inside it holds vital organs that the butterfly needs to survive.

Most of a butterfly’s digestive tract is housed inside the abdomen. This is where the butterfly processes foods and wastes.

These are tiny holes found along the sides of the abdomen that let air travel into tracheal tubes in the butterfly’s respiratory system, allowing it to breathe. Unlike us, a butterfly’s mouthparts are not involved in breathing! Although spiracles may also found on other parts of the body, most of them are located on the abdomen.

All of the important male and female organs involved in reproduction are found in the abdomen, located towards the tip. The abdomen is also where the eggs develop and remain until a female butterfly lays them.

It is worthwhile to note that there is no such thing as a stinging butterfly. Butterflies have no stinging organs or venom in their abdomens, or anywhere else in their bodies. So don’t worry about having a butterfly land on you – they are completely harmless, and you should consider yourself lucky!

How are Butterflies Related to Moths?

Butterflies and moths are very closely-related insect groups that make up the Order Lepidoptera. They all use tiny coloured scales to colour and pattern their bodies and wings, and have very similar body plans and life cycles. It is easiest to understand how butterflies and moths are related if you first forget the word “butterfly” altogether! Imagine the Order Lepidoptera as the “Order of Moths”. This is fairly close to reality, since moths make up nearly all species in the Lepidoptera – butterflies are essentially just a very specialized group of day-flying moths, and they make up only a tiny part of the Lepidoptera! Now imagine that this “Order of Moths” was broken up into different groups of related moths that shared common features – like gall moths, ghost moths, leafroller moths, owlet moths, snout moths, geometer moths, big moths, small moths, fat moths, thin moths – you get the idea. Then imagine that one of these groups (just one of them!) contained “moths” that were usually brightly coloured, usually day-flying, had clubbed antennae, and pupated in a chrysalis. What would you call this group? The answer is: butterflies! Conversely, the word “moth” just refers to everything that is not a butterfly. As you can see, moths and butterflies are very closely connected, more so than most people realize. In fact, if butterflies had just been discovered today, scientists would very likely call them moths too, and the word “butterfly” would never even exist! So, what is the difference? How do you tell them apart?

How Do You Tell Moths and Butterflies Apart?

The most reliable way to tell butterflies apart from moths is to look at their antennae.

The antennae, or feelers, are found on the head just above the eyes. Generally, butterfly antennae (left) are ‘clubbed’, meaning that they are long and thin in the middle but end in a thicker lump, kind of like a golf club. The antennae are not fuzzy or feathery, but look more like wire. Butterflies hold their antennae out and forward, where they are easy to see.

In contrast, moth antennae (left) tend to be thicker in the middle and get thinner towards the ends, appearing to taper to a point. Moth antennae are feather-like, covered in projections or teeth that make them look like a feather or comb. For some moths this is very obvious, but for others the feathery parts are very short and hard to see. Unlike butterflies, some moths tuck their antennae alongside their bodies when they are resting, but many hold their antennae out like butterflies do.

There are various general “rules” listed below for telling moths and butterflies apart, but be warned – there are many exceptions to some of these “rules,” and they are not as reliable as looking at the antennae! The Eight Spotted Forester (Alypia octomaculata) (left) is colourful, has wire-like antennae, and flies during the day – but it is actually a moth!

Challenge: Do you see butterflies, moths, or both?

Scroll down to see the answer!