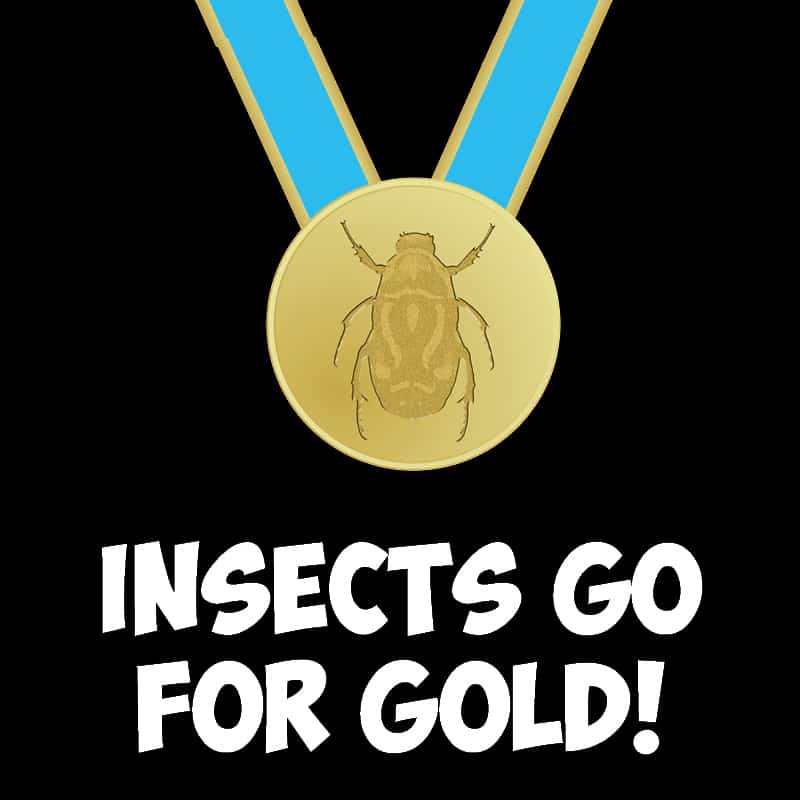 With the Olympics just around the corner, the top athletes of the world are working hard to be the fastest, strongest and go for the gold! For the millions of insects species worldwide they have to be on the top of their game 24/7, 365 days a year. To survive and thrive insects have developed extraordinary physical skills to excel in a competitive world.

Imagine being able to run really fast but not be able to see where you’re going! This is the case for the world’s fastest insect Cicindela hudsoni, an Australian tiger beetle. They can sprint up to 9 km/h covering 120 of its body lengths in a single second! They use their huge eyes to locate and stalk prey. The only pitfall with their speed is that they run so fast that they temporarily go blind! The tiger beetle moves so quickly that their eyes can’t gather enough light to form an image of their prey. They have to stop and spot their prey again before giving chase. To compare the world’s fastest man, Usain Bolt covers just 5 body lengths per second. To match the beetle, he’d have to run at 772 km/h!

Until recently the crown for the world’s strongest insect went to the Rhinoceros Beetle capable of lifting an incredible 850 times its body weight. This crown was newly usurped by the Horned Dung Beetle, capable of pulling an astounding 1141 times its own weight! This is the equivalent of a 150-pound person lifting six full double-decker buses! These beetles have developed extraordinary strength to compete for mates. Males uses their horns to battle rival males away from the females. In terms of the greatest weight lifted by an animal the African elephant no doubt comes out on top of the podium but in terms of strength to body size ratios the dung beetle takes the gold horns down!

Life can be difficult when you’re small and trying to jump to get something on the highest shelf. It wouldn’t be so hard if you were an insect called a Common Froghopper, Philaenus spumarius also known as the spittlebug. This tiny insect is only 6 millimetres in length and can jump as high as 70cm, that is 115 times the length of its body!

Froghoppers have a novel way of jumping they catapult themselves through the air. Using two large muscles to catapult themselves, they lock their short back legs in a way that they hold their jumping muscles until they have enough energy to break the lock and send the froghopper flying! The human record for high jump is 2.45m by Cuba’s Javier Sotomayor. If Javier could jump like a froghopper he would be able to jump to the top of a 210 metre tall building!

Come learn about these amazing insect record holders and more at the Conservatory until Sunday, January 8th, 2018 during our Holiday Activites for Kids!